WHAT IS NORTHERN SOUTH PARK?

Northern South Park (NSP) encompasses over 200 acres of land on the southern edge of the Town of Jackson. The land is owned by two families: the Gills and the Lockharts. 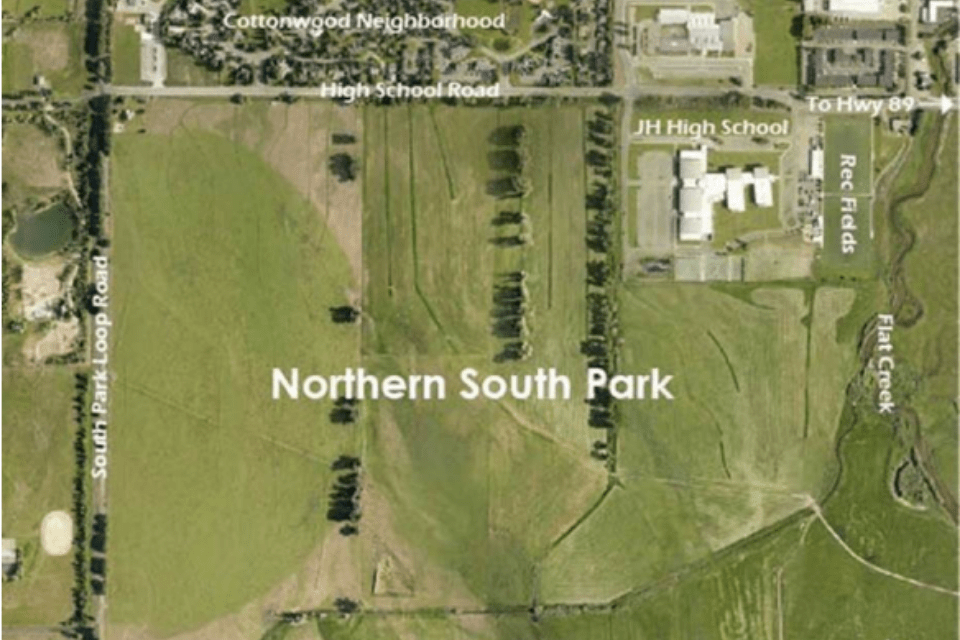 WHY SHOULD WE CARE?

NSP is a potential site for new housing development that aligns with the vision of our Comprehensive Plan as it is close to transportation, schools, and other local amenities.

The Comprehensive Plan on NSP:

“This transitional subarea is identified as a possible location for future residential development at a similar density to the adjacent West Jackson Residential neighborhoods. While the priority of the community is to first infill and redevelop other already developed Stable/Transitional Subareas in order to meet the Growth Management goals of the Plan; if necessary, this subarea is a suitable location to meet those goals due to its close proximity to many existing Complete Neighborhood amenities.

Should development of the area be needed in the future, it should be the subject of a neighborhood planning effort that addresses traffic congestion along High School Road. One possible option to be considered is a future east-west connector road between South Park Loop Road and Highway 89. An appropriate Flat Creek buffer will also need to be established in order to ensure the wildlife, natural and scenic values associated with this community resource are maintained.”

Throughout this process, we have advocated for our vision for Northern South Park: an inclusive, sustainable, and walkable neighborhood that reflects our community values. We want as much deed-restricted and income-linked housing included as possible in return for any increase in zoning (permission to build more homes, which increases value) that the landowners receive through the planning process. The questions are: what types of housing will be approved and how well will the Jackson community be served by the final development plan?

If NSP is our last good opportunity to build homes that locals can afford, we need to ensure that there is a meaningful net gain of homes for locals vs. luxury units when developing the entire area. We are excited to see the current proposal includes phasing and integration of free-market and deed-restricted units. We have confirmed that the community as a whole will benefit along with the landowners.

The Draft Plan represents a huge win for homes for locals. As the Draft Plan moves forward, we will advocate for more density with a higher ratio of deed restricted homes to free-market homes, i.e. 75/25 (it is currently 70/30). We also want to see details about the breakdown of homes in the Affordable categories. It is important to clarify how many homes will be built in each of the Affordable categories (0-50% MFI, 50-80% MFI, and 80-120% MFI) to ensure we are serving the entire spectrum of the community.

Finally, we want to know how many of the deed-restricted homes will be owned/operated by businesses. There will be a significant subsidy needed to build deed-restricted homes, and businesses will need to step in to invest in a portion of these homes. While employee housing is a part of the solution, we also recognize the dire need for homes for locals that are not job-dependent. We want to know how many homes will be available for community members at large versus employees of a specific organization.

In early July, the County Commissioners voted to approve the NSP neighborhood plan.

We are also waiting for final details about the potential Trust for Public Land (TPL) donation and if landowners plan to opt-in to the plan from consultants. You can keep a close eye on this website to watch past Steering Committee meetings and view reports from consultants.

At the earliest, people will be moving into NSP homes in 2026.

HOW CAN I GET INVOLVED?

We want there to be even MORE density in NSP. We wrote a comment letter to the Town Council and County Commission asking for more density and a higher percentage of homes for locals. By increasing the density of NSP, we could both increase the percentage of community benefit (Workforce and Affordable homes reserved for locals) and provide a net benefit to the landowners. ⁠

⁠Write in (commissioners@tetoncountywy.gov) and encourage local leaders to support even MORE density for homes for locals in NSP.

Although approaching representatives can be intimidating, remember their job is to listen to you!

What is the history of the land in NSP?

Before 1800, native tribes were the only people who spent time in what we now call Jackson Hole. The tribes who frequented this region include the Shoshoni, Crow, Blackfeet, Bannock, and Gros Ventre. Stephen Leek received the land in the Porter estate at no charge through the Homestead Act, which was passed in 1862. Stephen Leek was also involved in one of the last massacres of native people in this region at the confluence of the Hoback River and Granite Creek in 1895. Stephen Leek homesteaded the land until he sold this land to Bruce Porter.

Who are the Gills and Lockharts?

The Gill family is a ranching family in Jackson Hole who operates the Hereford Ranch in Northern South Park (NSP). Robert “Bruce” Porter started the ranch in 1928 and purchased the NSP location in the 1930s. Ralph Gill, his son, took over the ranch in 1961 and Robert Gill took over in 1994 and still runs the ranch today. Robert Gill is married to Patti Gill, and they have multiple children.

The Porter estate was split between the Gill and Lockhart families in the early 2010s. The Gills and the Lockharts are related: Kelly Lockhart is married to Robert Gill’s sister, Elizabeth.

The Gill and Lockhart families currently own ranching operations, significant acreage in South Park beyond the land in NSP, and many valuable commercial properties and businesses downtown like the Teton Theater and Jackson Drug.

What about private property rights?

“Property rights” means that the landowners can build what is already allowed. Right now, the majority of NSP has rural zoning, which allows one home for every 35 acres. There is also a 26-acre parcel in the northwest corner on Gill land which is zoned Suburban. A sketch plan for 84 free-market multi-million dollar homes has already been approved for that parcel.

Any zoning change that adds density to the rural NSP land represents an increase in value for the landowners. With added density, landowners can sell more parcels and build more homes, which translates into tens to hundreds of millions of added profit (depending on the zone change) for the landowners. Landowners are in no way entitled to increased zoning. We want to ensure that there is a reasonable community benefit in return for potential massive profit margins for the landowners in NSP.

Taken from the Draft NSP Plan

Have the Gills and Lockharts paid property taxes on NSP?

Property taxes are based on how the land is used. The land in NSP is currently zoned as agricultural and is therefore taxed at a very low rate. If the zoning changes to accommodate residential development, the homeowners will be responsible for paying property taxes based on the new zoning, which are substantially higher than agricultural use taxes.

For example, the Gills have paid about $2,300 on one 37-acre parcel bordering High School Road over the last ten years. As a comparison, a single-family homeowner in the Rangeview neighborhood would have paid about $35,000 during the same time period.

You can visit this website, click on different NSP parcels and find tax information from the last decade (the tax assessor’s office can give you tax info for further back in time than shown on GIS).

What about the Gills’ donation to the Trust for Public Lands?

Recently, Nikki Gill announced that her family was willing to donate 45 acres of land to the Trust for Public Land (TPL). We are waiting to see how this donation would be used to build homes for locals, as the land transfer is not under contract as of yet. Meanwhile, the Gills have said they will only complete this donation if their suburban-zoned land is moved to the southern end of NSP, resulting in an arrangement that is more of a “quid pro quo” (a trade) than a “donation.”

What is the Trust for Public Land?