WHAT IS A REAL ESTATE TAX?

Also known as a real estate transfer tax, a real estate tax (RET) is a tax on passing the home title from one person to another. States, counties, or municipalities can impose RETs. RETs can include exemptions for certain types of buyers based on buying status or income level. 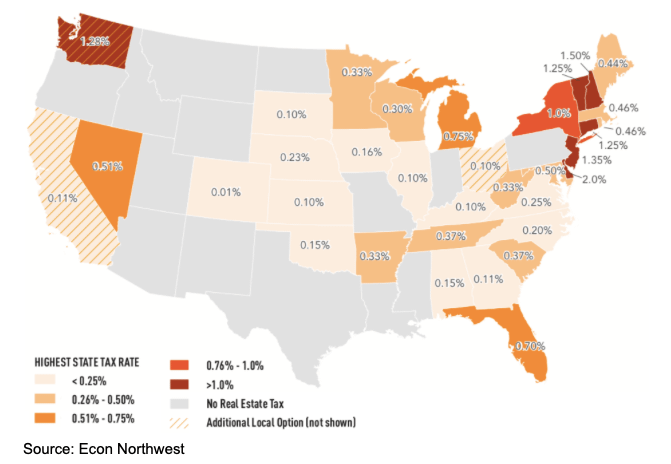 WHY SHOULD WE CARE?

As the housing emergency permeates Wyoming, we support a local-option RET, meaning that each county could decide whether (and how much) of a RET it wants to impose. We STRONGLY support a RET in Teton County, where real estate sales are in the billions every year, and the skyrocketing real estate values are pushing local workers and retirees out of their homes.

It is critical to understand that state legislation allowing a RET (including the bill introduced during the 2022 budget session) would simply allow counties to bring a RET bill to its voters. The passing of this bill alone would not impose a state-wide tax.

Our next opportunity to pass a RET bill will be in early 2023. Before then, we need to strategize and build a statewide coalition to bring the bill back with momentum. We will be working with the Chamber of Commerce and local realtors to get this bill passed in 2023. If and when a local-option RET bill passes, we will be able to garner support locally as a RET bill would then go to a vote here in Teton County. Stay tuned!

HOW CAN I GET INVOLVED?

The most powerful voices in this debate are realtors, as the main opponent of the bill is the Wyoming Board of Realtors (WYBOR). Teton County realtors make up the majority of members in WYBOR, so we need to make sure our local realtors support bringing this tax option to voters. If you know any realtors, make sure they are speaking up in support of passing a local-option RET bill, especially during the next legislative session!

Business owners who have struggled with finding or housing employees can also have a tremendous impact on state legislators. If you know business owners, especially those struggling with housing employees, make sure they are lending their support to Anna Olson (the head of the Chamber of Commerce) who is working tirelessly to organize support statewide for this bill.

Better yet—do you know any legislators, realtors, or business owners from around the state? Share your thoughts about RET with them and get them to contact their local electeds. We need to build support for RET throughout the state  before early 2023!

When a bill is considered in the state legislature, it starts in a House/Senate committee. If it passes through the committee, it then travels to the House and Senate floors for a vote of the entire legislative body. There have been many iterations of a RET in Wyoming, especially during the last few legislative sessions. In 2022, the bill passed out of a committee for the first time: the House Revenue Committee.

Why is it so hard to pass a RET in Wyoming?

There are many reasons why it is difficult to pass a real estate tax in Wyoming, but the main barrier is the legislature’s opposition to new forms of taxation. Wyoming is the most conservative  state in the nation, and tax-averse Republicans maintain a super-majority in the state legislature (there are fewer than 10 Democrats of the 90 legislators in Cheyenne).

The main arguments against the tax include: the tax would create additional financial barriers for homeowners; and there are constitutional challenges regarding how to allocate the revenue and taxing different forms of property (agricultural vs. residential).

Main opponents: The Wyoming Board of Realtors

Supporters argue that this tax is just another form of sales tax. If we only tax homes 1% over $1 or $1.5 million in Teton County, we would not prohibit people from entering the market. For example: if a family purchases a $1.2 million home and the first $1 million is exempt, they would pay $2,000 in RET (1% of $200,000). Finally, Wyoming is also experiencing a budget deficit that this tax could help alleviate. We estimate that a RET on home purchases over $1 million in Teton County would bring in about $13 million each year. For reference, the budget of the Jackson/Teton County Affordable Housing Department was $13 million in 2021.